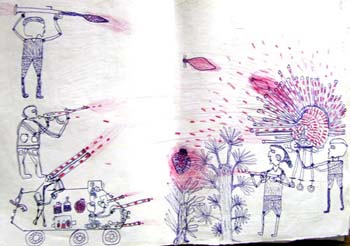 "Around the world, children are singled out for recruitment by both armed forces and armed opposition groups, and exploited as combatants. Approximately 250,000 children under the age of 18 are thought to be fighting in conflicts around the world, and hundreds of thousands more are members of armed forces who could be sent into combat at any time. Although most child soldiers are between 15 and 18 years old, significant recruitment starts at the age of 10 and the use of even younger children has been recorded." [Amnesty International]

See the tab, Joseph Kony and the LRA.