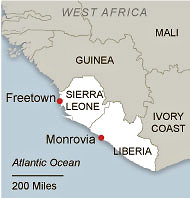 The Special Court for Sierra Leone

THE HAGUE: May 17, 2012 — Charles G. Taylor, the former president of Liberia and once a powerful warlord, was convicted by an international tribunal on Thursday of arming, supporting and guiding a brutal rebel movement that committed mass atrocities in Sierra Leone during its civil war in the 1990s. He is the first head of state to be convicted by an international court since the Nuremberg trials after World War II. [NY Times]

Charles Taylor was born to a family descended from freed American slaves - the group which still dominates Liberia. 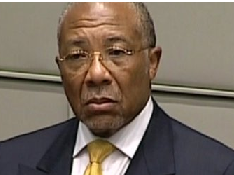 During Sierra Leone’s decade-long civil war, tens of thousands of people were maimed and killed, and even more people were displaced.

Children were frequently forced to take part in the violence during the civil war, with girls and boys often mutilated or forced to cut off people’s limbs.

Diamonds, as well as atrocities, also came up repeatedly in the 2,500-page judgment. The judges agreed with the prosecution that diamonds mined in Sierra Leone were used to pay for arms and ammunition for Mr. Taylor’s proxy army ... [NY Times. 5/30/2012]