Political Science and Lincoln Junkies, rejoice! A treasure trove of information awaits you.

Seward was one of the favorites to win the presidential nomination, when Lincoln won it insterad. After his election, Lincoln appointed Seward Secretary of State.

William H. Seward, secretary of state under both Lincoln and Johnson, was an ardent expansionist. He was committed to the spread of American influence throughout the Pacific as a means of enhancing the nation’s trade and military standing.

Russia had been interested in selling Alaska for a number of years. The region seemed to have little value and was remote and hard to defend. Negotiations with the United States were opened during the Buchanan administration, but came to a halt with the opening of the Civil War.

Seward actually began negotiations with the Russians before receiving authorization from Johnson. Nonetheless, when the outline of a deal was presented to the cabinet, Seward was surprised to find little opposition. The agreement was signed in March 1867 and transferred Alaska to the United States in return for a payment of $7.2 million, amounting to a price of about 2.5 cents per acre for an area twice the size of Texas.

The treaty was ratified by the U.S. Senate by a single vote.

Criticism in the press was harsh, portraying the newly acquired wasteland as “Seward’s Folly,” “Seward’s Icebox” or Johnson’s “polar bear garden.” It was not until the 1890s with the discovery of gold that public attitudes regarding Alaska began to change.

Samples from the Library Of Congress 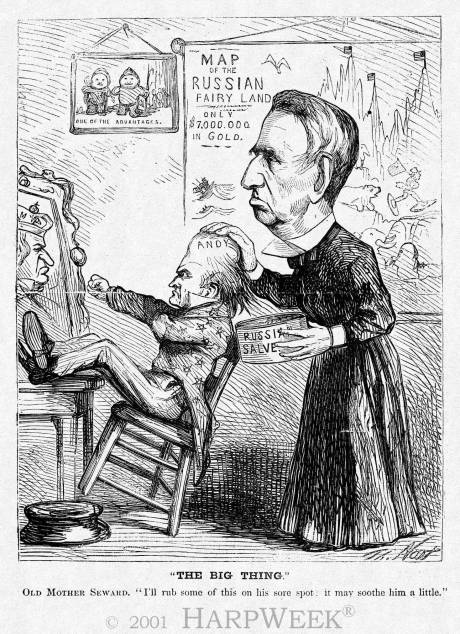