Constitution Day: A look at the 24th-26th Amendments to the U.S. Constitution

“At the beginning of the 1960s, many Americans believed they were standing at the dawn of a golden age. On January 20, 1961, the handsome and charismatic John F. Kennedy became president of the United States. His confidence that, as one historian put it, “the government possessed big answers to big problems” seemed to set the tone for the rest of the decade. However, that golden age never materialized. On the contrary, by the end of the 1960s it seemed that the nation was falling apart.” (History.com)
The 24th &25th Amendments to the Constitution were passed in the 1960s; the 26th Amendment was a result of a long period of time in which many  felt that if you could serve in the military, you should be able to also vote. It was passed in 1971.

Amendment 24: Outlaw of the Poll Tax

The federal Constitution's 13th, 14th and 15th amendments ended slavery, protected against state discrimination and guaranteed that people could not be denied the right to vote because of their race.

However, the 15th Amendment did completely not guarantee the right to vote, it only made it against the law to deny someone their right to voted based on their race. Enter the Poll Tax and other means such as literacy tests to deny the vote to citizens.

The 24th Amendment to the Constitution  outlawed the Poll Tax. Virginia, Alabama, Texas, Arkansas, and Mississippi were the only states to enforce a poll tax at the time of the ratification. The poll tax was deemed unconstitutional in 1966; the Supreme Court had deemed that it was in direct violation of the protection clause in the 14th Amendment (Source:  http://constitution.laws.com/24th-amendment)
Amendment 25: Presidential Succession
John F. Kennedy was President of the United States during a few of the most significant civil rights events in U.S. history.

“the 87th Congress--after 20 years of effort--passed and referred to the states for ratification a Constitutional Amendment to prohibit the levying of poll taxes as a condition to voting. Already thirteen states have ratified the proposed Amendment and in three more one body of the Legislature has acted. I urge every state legislature to take prompt action on this matter and to outlaw the poll tax--which has too long been an outmoded and arbitrary bar to voting participation by minority groups and others--as the 24th Amendment to the Constitution. This measure received bipartisan sponsorship and endorsement in the Congress--and I shall continue to work with governors and legislative leaders of both parties in securing adoption of the anti-poll tax amendment. “ - President Kennedy to Congress, February 28, 1963. To read the full transcript, go to The American Presidency Project
Interested in Learning more? Watch this short presentation from CBS news.com
John F. Kennedy was the 35th President of the United States (1961-1963), the youngest man elected to the office. On November 22, 1963, JFK was assassinated in Dallas, Texas, becoming also the youngest President to die, and Lyndon B. Johnson is sworn in.  Who would take his place as Vice President of the U.S. and how would that be determined?  Enter Amendment 25
“The 25th Amendment, proposed by Congress and ratified by the states in the aftermath of the assassination of President John F. Kennedy, provides the procedures for replacing the president or vice president in the event of death, removal, resignation, or incapacitation.  The Watergate scandal of the 1970s saw the application of these procedures, first when Gerald Ford replaced Spiro Agnew as vice president, then when he replaced Richard Nixon as president, and then when Nelson Rockefeller filled the resulting vacancy to become the vice president”.  Source: Cornell Law School, Legal Information Institute.   Read more from the Congressional Research Service

Source: History for Free
You can also view this short video on the history of the U.S. Constitution, and the 26th Amendment.

Want more information about Constitution Day? Use this Pass or go to the Library of Congress online. 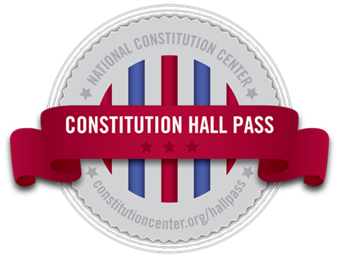