Econometrics is a method of analysis that combines the principles of statistics and mathematics to examine economic data and predict market behavior such as price changes and consumer buying patterns. Econometrics might best be described as a system of mathematical tools that allow economists to examine large amounts of data to determine simple relationships and to explain why those relationships exist. For example, econometrics can identify the relationship between education and average yearly income for a large group of people. Using the measuring instruments of econometrics, economists can predict with a high degree of reliability the range of income a person can expect to have based on the person's field of study and level of education. Norwegian economist Ragnar Frisch (1895–1973), cowinner of the first Nobel Memorial Prize in Economics, is widely recognized as the founder of econometrics.

Panel data refers to a set of data that measures numerous phenomena over multiple periods of time. For example, the Panel Study of Income Dynamics (PSID), which is conducted by the University of Michigan, charts socioeconomic and health factors over several generations of American families. The PSID contains data on such matters as employment, earnings, emotional well-being, vehicle ownership, and educational level for more than 70,000 individuals over a period of many years. 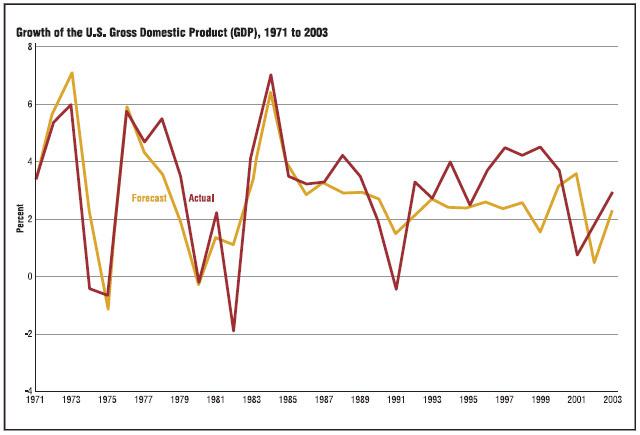 Economists use econometrics, a system of mathematical tools for analyzing past economic data, to predict future trends. An example of the accuracy of these predictions is found in this chart, which compares the actual U.S. Gross Domestic Product (GDP; a measure of the total value of the economy) with forecasts about GDP made with econometric models by the Research Seminar in Quantitative Economics at the University of Michigan. XNR PRODUCTIONS. COPYRIGHT © CENGAGE LEARNING.

Regression analysis is the study of how a change in one variable affects another variable. An economist might perform regression analysis to examine the nature of the relationship between variables such as price and demand, or the gross domestic product and unemployment. For example, by determining how a change in price affects demand for a product, economists can predict the rates at which consumers will buy products at different price points. Such studies are frequently used by governments to forecast trends in the economy and to develop economic policy. A business might base its marketing strategies on the results of a regression analysis. For example, a study might show that lowering the price of handbags by 10 percent causes a company to lose customers who average more than $80,000 in yearly earnings. If the company were to lower the price in an attempt to reach a wider audience, it would know how to adjust its advertising to reach its new target audience.

Discrete choice, as the name suggests, refers to the analysis of choices that individuals or firms make from a set of alternatives. Economists use discrete choice models to study what types of cell-phone plans consumers from various demographics choose and what types of laptops companies buy for their employees. Marketers could then use this information to determine prices and options for cell-phone plans and pricing for laptops sold to businesses.